If you haven’t read the first part check it out here, also don’t forget to check out the Phoenix Wright Cosplay Special.

Roll on Day 2 of the London MCM Expo, some people like to do two costumes over the two days but not me, it was Phoenix Wright all the way especially seeing as I had heard about a Phoenix Wright Villains group meet up, but the Sunday was also about Shopping and Video Games, as it is with most events with uprooted shops they tend to cut their prices for the final day or for the final hours of the final day making it a great time to do your shopping, although if there’s something you really want you’re probably better off buying it when you find. I had a good perusal of the merchandise but of the discounts on display nothing really grabbed me in the myriad of plushies, posters and pocky, but of the weekend deals I found myself at the Insert Coin stand where they were selling Video Game inspired t-shirts from modern and retro games alike such as GoldenEye, Resident Evil, Shadow of the Colossus, Gears of War and Bioshock. They had a deal for buying two t-shirts so me and my friend Chris went in together to get one each, he got the Shadow of the Colossus tee and I got this Mario Kart inspired t-shirt. 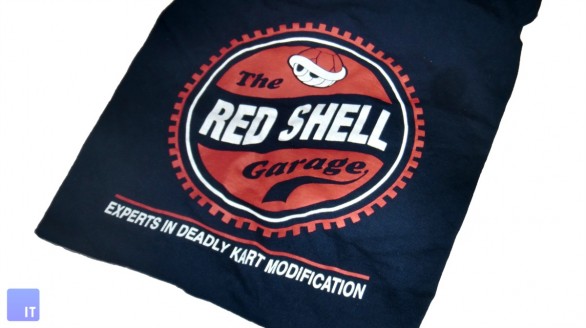 Next up on the shopping list Manga and Anime DVDs, myself and my friend Chris had read in the program that certain stands would always have discounted Manga and Anime so we headed off to one such stand MVM entertainment selling Anime DVDs, Chris picked up two DVDs for a discounted price then we moved onto the Manga, we found the TOKYOPOP stall selling 4 for £10 which we found to be great deal, Chris found a couple he wanted so offered to go half and half if I could find two I wanted, so we kept looking through and eventually had a pile of 8 we wanted I was even lucky enough to snag a GetBackers, which according to the person working the stall always sells as soon as it’s put out. We came across the TokyoToys stall where they had a mixed bag of Japanese sweets including Pocky, Hi-Chews and Ramune flavoured sweets in a small container shaped like a Ramune bottle for only £20 and believe me it was worth more than £20.

Now onto Video Games, I was still very keen to play Gran Turismo 5 but hadn’t seen it so far, it is mentioned in the programme but I wondered if the recent release date push back might have affected it’s showing here. Me and Chris split up as he wanted to go and see something else so I wondered around by myself playing games and stopping for people to get a snap of Phoenix Wright. As well as some of the more main stream games I also encountered some wonderful Indie games like Ongaku a rhythm action game developed by SmashMouth Games for Windows PCs, this game lets you choose a music video and it will generate notes for you to play along to, you have the option to control with a Mouse and Keyboard or a Xbox 360 Controller, I opted for the Xbox 360 Controller thinking it would be easier to match the colours of the notes on screen to the colours on the A,B,X,Y buttons on the Xbox 360 Controller but I was quite wrong as the speed of the song I choose picked up I started making mistakes and second guessing what I thought was correct looking down at the controller missing even mroe notes, I had only chosen the easy difficulty to begin with but the combination of moving the cursor up and down the screen with the analogue stick and pressing the buttons was a little too much to take in on my first play.

After I failed the song the person demonstrating the game put it onto super easy tutorial mode where you can press any button to get through the song, at first I felt a little insulted as I’m usually quite good at this sort of game but it actually helped show where the sweet spot for hitting the button was and getting to grips with moving the analogue stick up and down, I let someone else try after my play but I do think it would have been easier to control it with the mouse and keyboard the analogue stick on the Xbox 360 Controller is a bit awkward as you have to keep tapping it up and down to move the cursor in line with the notes purhaps it would have worked better if it was truly used as an analogue stick whereby pushing it up all the way keeps the cursor at the top of the screen and pushing it down keeps the cursor at the bottom of the screen allowing for minor adjustments to move the cursor, the only problem with this is you thumb might get cramp before the song is over being forced to stay in one position for a long line of notes, it would be hard not to compare it to similar games so I’d have to say if you enjoyed games like Gitaroo Man or Jam with the Band (Daigasso! Band Brothers in Japan) then you’ll enjoy this game too, you can download a whopping 528MB demo of the game from their website and try it out for yourself.

Next up on the Indie list was a highly anticipated game of mine Explodemon developed by Curve Studios you may know them as the co-developers of the Buzz! Sony PSP games, Explodemon is not to be confused with ‘Splosion Man which is an XBLA game released last year. Explodemon doesn’t have a firm release date yet but is set to come out before the end of the year, It seems ready perhaps only needing a little polish, the only gripes I had with the game was that the jump mechanic didn’t always land you on a platform especially the ones your character can jump through to land on, especially noticeable on high platforms that require you to grab on to the edge you find you have to hit a specific spot or you won’t grab onto the edge. Another that doesn’t really affect game play is the grey background inbetween screens when you pass from one to the other as you do in a platformer you get a grey screen presumably just a place holder or something they plan to illiminate entirely and finally the unforunate placement of an NPC right at the end of a screen I ran straight past him onto the next screen forcing me to backtrack albeit very short backtrack just to get a bit of dialogue. and with my gripes out of the way onto the positive parts I enjoyed the dialogue in the game they know their target audience, who’ve grown up with badly translated Asian games, most of the lines from the character Explodemon himself have intentionally bad grammar and then there are the lines that make it a very British game, like when space aliens attack and a pop up says something along the lines of:

Aliens will be invading between 8am and 6pm. They will not call ahead and will not leave a card if they have visited while you are not in.

This game has been a long time coming and I can’t wait for it to finally get a release on the PlayStation Network.

Now onto the Nintendo Unleashed stand, as you can imagine this was very popular on both days, they had GoldenEye 007, Kirby’s Epic Yarn, Donkey Kong Country Returns, Disney‘s Epic Mickey and a range of Nintendo DSes playing various games

Also of note on the Video Games front, DDR:UK had a great setup hidden away at the back of the main hall, you turn a corner and find yourself among DDR Machines on one side and a row of televisions and games consoles both old and new on the other side. How often do you get to play DDR on full size arcade machine for free and even though you probably have the consoles and video games on the other side like Smash Bros, but I did notice Taiko Drum Master on the PS2 although there was an English release it only came out in America making it quite rare especially with a two drum setup. Another rhythm action game on show was good old Rock Band this time being held as a tournament, I didn’t enter as I didn’t want to show anyone else up with my super Medium/Hard skills, yeah press that orange button!

And so to finish the event I met up with my friend Chris and we headed off to the Cosplay Masquerade in MCM Expo Theatre. You may notice a lack of photos in this article and I blame that entirely on my compact camera, so I left the photography to the professionals and instead of describing the Masquerade you can see photos of it here. There are some excellent pictures (none of me though) and be sure to check out the whole gallery to see some of the amazing Cosplay at the MCM Expo here.

After the Masquerade the hall was being shut down and we were herded towards the exit, MCM Expo is definitely a day time event leaving you the evening to party with you friends or just sit around in your hotel room watching television and eating noodles. But I can’t wait for the next MCM Expo on the weekend of 27th to 29th May 2011, where you can be sure to see me in my all new and improved Phoenix Wright Cosplay. And I hope to see you there too.

Check out other articles from MCM Expo October 2010 Day 1 write up and the Phoenix Wright Cosplay Special.