My very first MCM Expo and the idea of doing Cosplay was being discussed with my fellow travellers after talks about costume ideas I already knew what I would be doing for my Cosplay, as I already had the costume for a few years now I decided to break out the Phoenix Wright Ace Attorney Cosplay, that’s right Nick himself. I suggested that my friend Chris do Professor Layton after the newly announced Professor Layton vs Phoenix Wright game, but he was weirded out by his beady eyes and instead went for no costume all, which was great as it meant he was my official photographer.

I made the sacrifice and packed my suitcase to bursting point then strapped a briefcase to the outside (I know now I should have wrapped it in something or put it in a bigger suitcase as it got a bit damaged on the journey there) it toppled over many times with it’s increased mass and the wheels now point inwards making it harder to pull along seems they don’t make cheap suitcases for the likes of me. After ALCon this year I had been carrying a green shoulder bag with me which kinda shows up on the Phoenix Wright costume but being lazy I didn’t take it off for photos and it didn’t look quite right, some of my friends suggested a briefcase would be more suited to the lawyer character, although thinking about it I can’t ever remember seeing a briefcase in the game but I figure Phoenix has got to keep his Inventory of Evidence somewhere why not a briefcase. And it’s ideal for when people want to take your photo, just place it on the ground and pose.

After all the travelling we got into our hotel and I was thankful to find a ironing board and an iron in the cupboard so I could iron my very creased shirts, I was sensible and brought three shirts for two days of Cosplaying so I could be clean for each day and just in case Godot throws his coffee at me I have a change of shirt. We didn’t end up going to the preview event on the Friday night as it was late so I got everything ready for Saturday.

On Day 1 of the Expo I knew there was going to be a Phoenix Wright Cosplay meet up happening at the very entrance to ExCeL London. From the forum post I had seen that I would be the only Normal Phoenix other than Hobo Phoenix and Young Feenie. The meet up started at 1pm but I was running late, I dragged my friend Chris along to take some pictures with my camera, we wondered around the entrance looking for them, I was sure they would stand out to me but I failed to see them anywhere, we ventured outside wondering if they had left the entrance to find a better location to take pictures we walked around the square outside looking at the Cosplay meet ups happening even stopping for some Phoenix Wright fans demanding that they take my picture. we circled round back to the entrance perplexed by the lack of Phoenix Wright Cosplayers I wished that I had contacted the organiser to get their mobile number but there on the bridge to the DLR station I discovered my fellow Cosplayers. 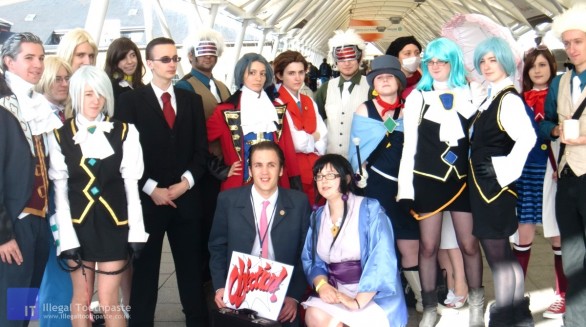 In case you can’t tell I’m the one crouched down in the middle on the left. The Maya crouched next to me was very much in character calling me Nick and asking me to buy her a burger. It was good fun meeting over like minded Cosplayers especially after ALCon where I only met one Godot (the one on the far right of this photo). I think I’ve done quite well with my costume so far I got the suit off eBay for £5 and the Tie from eBay too for only a couple of quid the attorneys badge is made of cardboard and the hair is my hair gelled back unfortunately I haven’t been able to find anything strong enough to fully show off Phoenix Wrights spikes but this year was pretty close as I tried Schwarzkopf got2b glued hair gel and spray.

I know there’s room for improvement especially when you see the amazing costumes people make for themselves mine shows how cheap it is and I have been called out before, the suit is the wrong colour the hair’s not quite right and my badge is made of cardboard, but I am working towards making it even better for the next London MCM Expo in May, I’m looking into getting a Wig which would save lots of time spent doing my hair in the morning. I’ve already made steps to correcting these I got some Gold coloured Sculpey to make my very own attorneys badge. I have found the perfect suit in the right colour, unfortunately it’s in America so I will have a look around elsewhere but if I don’t find anything I might just go with that one.

I’d say it’s definitely improved over the years, in the beginning I was still wearing my glasses, but I went and got Contact Lenses so now I can blink in every photo. Here’s an example from Retrovision 2009 taken from Retro Gamer Magazine this article written by Paul Drury who was kind enough to come down and have a drink with us. 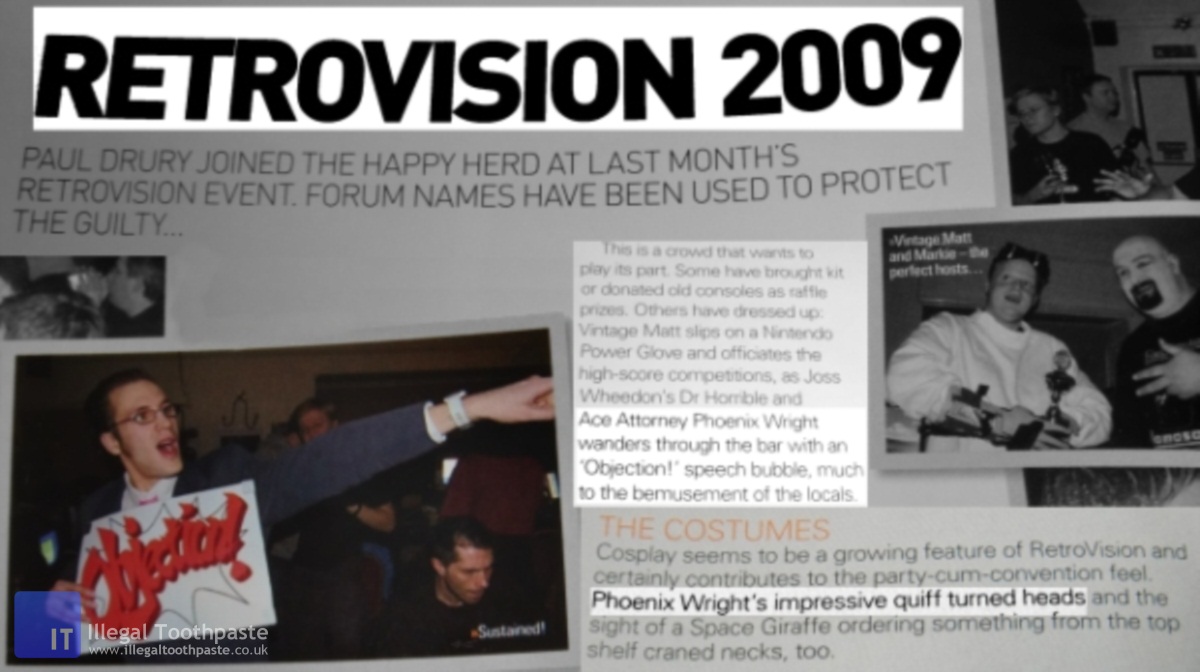 Of course the Objection sign has been a very prominent prop over the years, it definitely helps to show people what costume it is I’m wearing especially with the aforementioned imperfections.

So look forward to updates on the costume as it improves and why not make some suggestions in the comments below, I also welcome suggestions for other Props to use as Phoenix Wright.

Check out other articles from MCM Expo October 2010 Day 1 and Day 2 write ups.